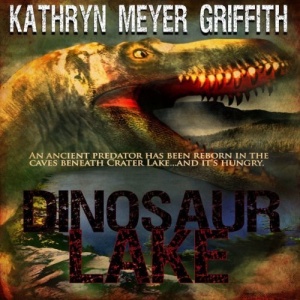 * I received a free copy of this audiobook from the author in exchange for an honest review. This audiobook was downloaded from http://www.audible.com

Henry loves his job. He is the Chief Park Ranger at Crater Lake Park in Oregon. He has spent the last eight years as a Park Ranger after leaving his life as a New York City police officer after being shot while on duty.

The park’s central attraction is the deep blue lake that was created by a volcanic eruption millions of years in the past. While leading a tour group Henry is on hand when an earthquake strikes the park. The tourists were shaken up but unharmed and Henry led them back towards the Lodge. This was the second earthquake they had in the last two years and it concerned Henry.

On the path back to the Lodge, Henry makes a stunning discovery. The earthquake had shaken loose a section of the ground and revealed a large and obviously ancient bone pile. The bones were too large to be those of a bear or mountain lion. In fact what they looked to be was dinosaur bones, but Henry knew that dinosaur bones had never been discovered in that region. He decides to contact a paleontologist to come and examine the bones to find out if his suspicions are valid.

Meanwhile one of the park visitors mentions that a year earlier her friend had seen a monster in the lake. Of course, noone believes it. Why would they? It’s ridiculous and preposterous.

People start to disappear and something attacks the homeless camp in the park.

Obviously since this book is called “Dinosaur Lake” the mysterious monster turns out to be a dinosaur. The author has done a good job of making this unrealistic situation come across as possible.

This book is a combination of “Lake Placid”, “Jurassic Park” and “Volcano”. It is a light and entertaining book.

The narrator has a good voice for coming across as a simple, good ol’ boy type of Park Ranger. He is able to convey the reluctance of a regular guy to believe in the unbelievable.

Kathryn Meyer Griffith is the author of twenty-two published novels as well as novellas and short stories.

To learn more about her visit http://www.goodreads.com/author/show/889499.Kathryn_Meyer_Griffith

Johnnie C. Hayes is a voice actor who has experience with commercials as well as audiobooks. To learn more visit his website at http://jchayesvoice.com/