Subtitle: A MEMOIR OF A FAMILY AND CULTURE IN CRISIS

There are a plethora of books being written and published that focus on minorities and the struggles they have had to endure both in the past as well as today. But, there is one minority group that seems to have been completely neglected – that group consists of poor white people.

The word “Hillbilly” in this book refers to poor, white people whose ancestral roots come from the Appalachian Mountain region.

This book is in no way a treatise of what every “Hillbilly” family is like. It is a memoir of one man’s family, how he grew up, and how he was able to break the cycle of addiction and poverty that stalked his family tree. He professes to have “escaped” the fate of many of his friends through education.

J.D. Vance also writes about how most of the people in his community lost jobs when manufacturing moved out of the area. This is why it is sometimes referred to as the Rust Belt.

The author, at times, portrays “hillbillies” as a lot of lazy, law-breaking lowlifes who think the world owes them a living. This may be true of some of these families, but I have a hard time believing that it applies to the majority.

I have to admit that I was fascinated by details of the author’s tales of his childhood and by the various members of his extended family. These people, especially his crazy (and violent)  uncles almost seem too clichéd to be real. His mother is portrayed as an addict who cared little for her children and much of J.D.’s emotional pain seems to trace directly back to her and to her actions.

There are so many shocking and seemingly crazy anecdotes included in this book that at times they seem too insane to be true.

Despite the abuses and the flagrant disrespect for the law, two admirable traits shone through all of J.D. Vance’s stories, and those qualities are; the theme of family loyalty and the sense of community. His family may have been poor, but if they were able to help out a community member in trouble, they would.

The one character who is central to the story is J.D.’s grandmother – or MAMAW (pronounced maam-awe) as she is known. Readers will find themselves drawn to her and despite her rough and tough demeanour, her love for J.D. shines through and becomes a beacon for him to follow when making life choices, even though her own life choices included killing a man. 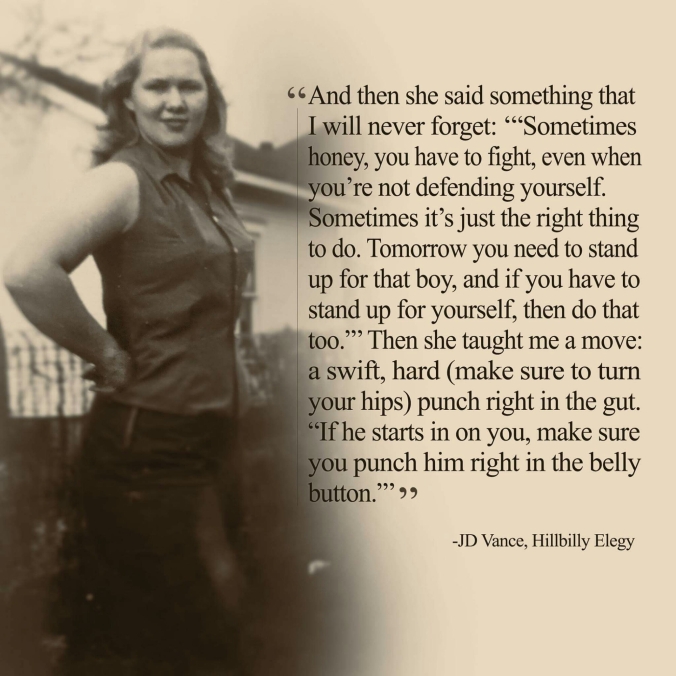 This is a picture of Mamaw in her younger days. 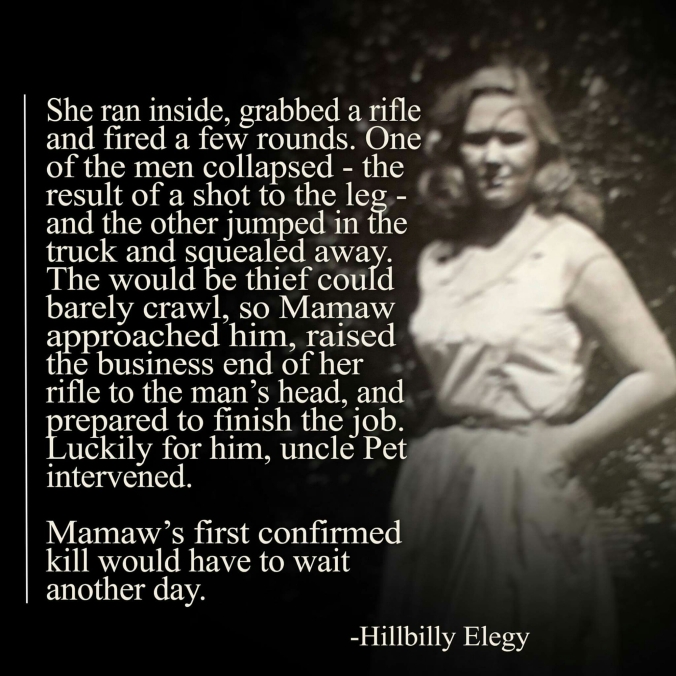 I enjoyed reading this memoir and I am glad that the author escaped the poverty of his youth and embraced upward mobility. He has since become a successful lawyer (and now a successful author.)

If you want a glimpse into a world that most “outsiders’ never see, then this is the book for you. *** I must warn potential readers that this book does include stories that are NOT suitable for children under the age of sixteen. ***

J.D. Vance grew up in the Rust Belt city of Middletown, Ohio, and the Appalachian town of Jackson, Kentucky.

He enlisted in the Marine Corps after high school and served in Iraq.

A graduate of the Ohio State University and Yale Law School, he has contributed to the National Review and is a principal at a leading Silicon Valley investment firm.

Vance lives in San Francisco with his wife and two dogs. 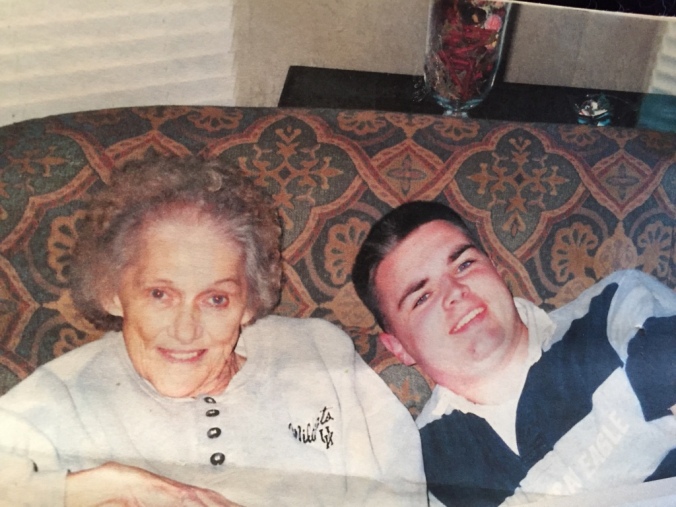 J.D. and his beloved Mamaw

The author with his dogs