Title: THE STRANGER IN THE WOODS

Subtitle: THE EXTRAORDINARY STORY OF THE LAST TRUE HERMIT

DESCRIPTION:  “In 1986, a shy and intelligent twenty-year-old named Christopher Knight left his home in Massachusetts, drove to Maine, and disappeared into the forest. He would not have a conversation with another human being until nearly three decades later, when he was arrested for stealing food. Living in a tent even through brutal winters, he had survived by his wits and courage, developing ingenious ways to store edibles and water, and to avoid freezing to death. He broke into nearby cottages for food, clothing, reading material, and other provisions, taking only what he needed but terrifying a community never able to solve the mysterious burglaries.” 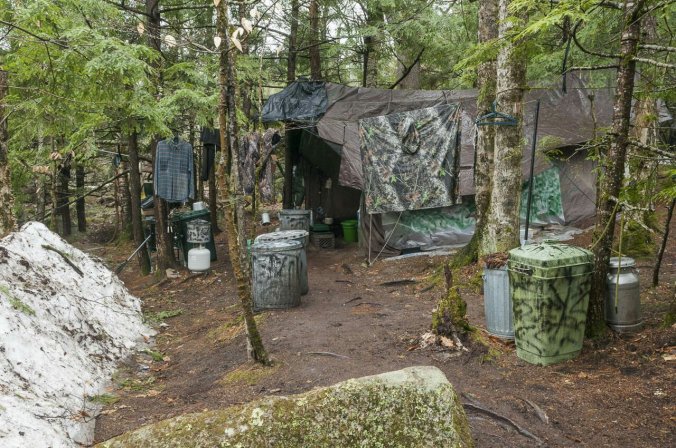 “Based on extensive interviews with Knight himself, this is a vividly detailed account of his secluded life—why did he leave? what did he learn?—as well as the challenges he has faced since returning to the world. It is a gripping story of survival that asks fundamental questions about solitude, community, and what makes a good life, and a deeply moving portrait of a man who was determined to live his own way, and succeeded.”

This book is a New York Times Bestseller, and after reading it, I can understand why. The subject matter will draw you in and you will find yourself developing an opinion on the “hermit.”

I find it fascinating that anyone could just one day decide to walk into the forest with minimal supplies and not come out again for decades.

I am sure that most of us have had the thought that it would be great to get away from it all, but even so, our idea of that “retreat from the world” almost always has a limited time frame. Humans are just not wired to be completely solitary … at least, most of us aren’t. As proof of this, think about jail. When an inmate severely misbehaves, the punishment is solitary confinement, and even the toughest, meanest, most hardened criminals attempt to avoid it. In fact, in 2015, the UN Commission on Crime Prevention and Criminal Justice in Vienna, Austria adopted revised rules banning solitary confinement as cruel and unusual punishment. The changes are referred to as the “Mandela Rules.”

Christopher Knight is “the hermit” who this book is about. He is an anomaly to the belief that people need contact with others to survive.

Christopher stole food and other essential items to help him survive, and created a hidden camp that wasn’t far from civilization and yet, somehow he was able to stay hidden and alone for over twenty years. Author Michael Finkel has done a terrific job of trying to understand the nonunderstandable and readers will be unable to put this book down.

Photograph of Knight at his camp in the Maine woods. Photo Credit: Maine State Police

This book is very much worth reading, and even though it includes a sketch of Christopher Knight’s camp as well as a sketch of the geographic area of Maine where his camp was located, I was extremely disappointed that the actual photographs taken by police were not included in this book. I would also have liked to have a photograph of Christopher Knight included as well. It is due to the lack of photographs that I am rating THE STRANGER IN THE WOODS as only 4 out of 5 Stars. 🌟 🌟 🌟 🌟

*** Even though the pictures are not in the physical edition of this book, there are multiple photographs available on Michael Finkel’s website; perhaps they will make it into future editions of this book.***

Because I was curious as to what Christopher Knight looked like, I searched on YouTube and found this video:

MICHAEL FINKEL is the author of “The Stranger in the Woods” and “True Story,” which was adapted into a 2015 major motion picture, starring James Franco and Jonah Hill.

He has reported from more than 50 countries and written for National Geographic, GQ, Rolling Stone, Esquire, Vanity Fair, The Atlantic, and The New York Times Magazine.

Michael lives with his wife and three children in western Montana and southern France.

GOOGLE BOOKS
Watch the following video for an author interview: