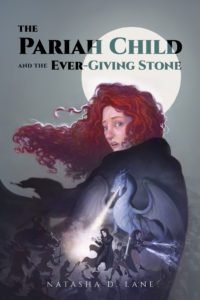 Title: THE PARIAH CHILD and the EVER-GIVING STONE

When Sarah was four, she promised her mother she would be a good girl — a proper young lady in their small country town — and that she would ignore the creatures who appeared to her and whispered in her ear of things unknown. But like all creatures of myth and legend, they won’t be ignored forever.

Now thirteen, Sarah is attacked by a wolf with poisonous black fur and strange, human-looking eyes. With the help of a few unexpected friends, she manages to survive the attack but soon discovers the creatures have returned. They want Sarah to find a powerful gemstone and bring it to them in Lyrica, their magical homeworld.

Her new friends urge caution, however. There may be more monsters like the black wolf. And the creatures themselves are frightening. Can Sarah trust them? Stuck between reality and imagination, her mother’s wishes and her own desires, Sarah faces an impossible choice – break her promise or do nothing to save a world in peril.

I was provided with a free copy of THE PARIAH and the EVER-GIVING STONE by author Natasha D. Lane.

I receive literally hundreds of review requests every month and I only choose a few to read and review. The synopsis of this book along with the unique title intrigued me from the moment I saw it.

From the first paragraph in this novel, I was hooked. It begins with: “Sarafina danced barefoot in the field, the afternoon Montana sun warming her skin and the grass tickling her tiny feet. Around her, small patches of glittery light flew here and there. These were her friends. They were much smaller than her with translucent wings and shimmering bodies coated in gold.”

How could anyone resist reading further? 50 words and I was enthralled. I immediately wanted to know more about Sarafina and about why she was alone, without any real friends. And what were the glittery patches of light? Were they real? Or something out of Sarafina’s imagination?

I love it when a book grabs my attention and imagination right away. It is one of the best feelings in the world to begin a new book, it’s as if you are embarking on a new adventure.

The prologue sets the tone for the entire tale. Sarah – age four – is a happy child who speaks to trees, fairys and other creatures. However, her mother wants her to be a ‘proper’ young lady and to ignore the creatures that speak to her. Sarah’s mother takes her somewhere to scare her and upon returning home, gathers Sarah’s books and burns them. Anyone reading this story who loves books they way I do, will immediately and forever hate the vile woman who is Sarah’s mother. The way she terrorized Sarah before burning her books will make your blood boil – remember, at the time, Sarah was only a tiny four year old child – barely out of toddlerhood. Want to know what the witch (with a capital B) did? You’ll need to buy the book to find out.

Sarah’s mother knows that she is seeing and hearing from magical creatures but forces Sarah to promise to ignore them. What else can a four year old child do but agree?

As Sarah ages the creatures appear and ignoring them becomes impossible when she is attacked by a wolf with human eyes.

It soon becomes apparent that the creatures are real and that they desperately need Sarah’s help or their world may end.

Sarah is faced with a difficult choice. Search for the magical gem that will save an entire world, or ignore their pleas and stay home. No matter what she chooses, her life will never be the same.

Filled with creativity and magical creatures, this book will appeal to lovers of THE CHRONICLES OF NARNIA.

Author NATASHA D. LANE has a gift for world-building as well as for creating believable characters. This story will tug, not only at your imagination, but also at your heart.

I rate this novel as 4 OUT OF 5 STARS ⭐⭐⭐⭐ and am adding it to my list of recommended reading.

Natasha Lane enjoys reading a wide variety of genres, but fantasy has always been dear to her heart. After a brief stint in romance, Natasha’s returned to fantasy and currently has two works in the making. She plans on releasing her first fantasy novel “The Pariah Child & the Ever-Giving Stone” March 22, 2018.

Natasha hopes one day to be a well known published author, whose writing informs as well as entertains her reader.

Besides being a book worm, Natasha is a documentary junkie, rom-com addict, health advocate, entrepreneur, and chef (in her own way).

She currently resides in Baltimore, MD. Despite where life may take her, one thing is certain. Natasha will always keep writing.