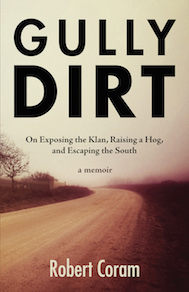 Subtitle: On Exposing the Klan, Raising a Hog, and Escaping the South: A Memoir 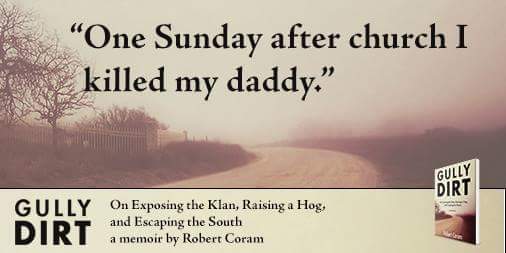 “A lot of romantic claptrap has been written about the South. I was born in rural Georgia and grew up there during the 1950s, and I never saw the romance. All I ever saw were people who were as mean as uncovered cat shit, people who took pride in being on the losing side of just about everything, people who could quote the Bible one minute and go into a violent rage the next.”

Paragraph one and I was hooked.

This is a pull-no-punches memoir that does not shy away from the ugly truths about growing up dirt poor in the South in the 1950s.

GULLY DIRT is cleverly written and filled with vignettes of his pre-teen and teen years beginning at the age of 12.  Robert Coram has achieved an excellent balance between humor and drama and readers will swing between wanting to laugh and wanting to cry.

Growing up in the deep South in a tiny town, Robert dreamed of escaping his retired military father and the blatant favoritism of Robert’s younger brother. He may have despised his father, but like all boys on the cusp of adulthood, he both needed and craved his father’s love and attention.

Author Robert Coram describes his birthplace as “… a place that has always been separate from the rest of the world.” The stories in this book prove that to be true.

Because Robert grew up in the 1950s, he grew up in a time that is completely foreign to how we live today. His hometown of Edison had its own prejudices and they held onto them as tightly as possible.

I read this book in a 24 hour period because I did not want to put it down. Some of the phrases the characters say in the novel will make you chuckle audibly. For example, saying that he was as “…mean as uncovered cat shit…” I mean, really, who talks like this? The answer is that in the 50s, that is exactly how the residents of Robert’s town spoke.

A) Easily offended by books that contain swearing or if

B) you are offended by the word “nigger” then you might want to skip this book. However, the only reason the “n” word is used in the book is because that was what Robert’s parents called black people and so he called them the same. It is historically accurate speech and it is not meant to be offensive.

If you are interested in an authentic accounting of growing up in the deep South with an overbearing and uncaring father and yet somehow turning out normal, then this is a must read.

* I received a free copy of this book through Netgalley. 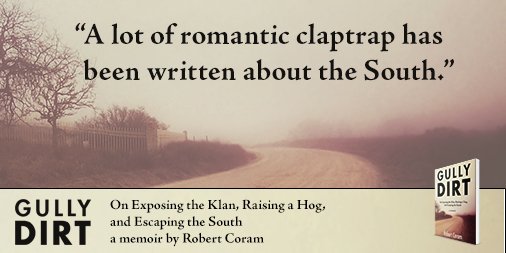 “This land, this place, this searing furnace, marks its children more indelibly and more visibly than does any other part of America.”

“Once this land was sea bottom. But not even the ocean liked this place …”

“Gully dirt ain’t good for nothing.”

“…that August I discovered the MAGIC of books, how words on a page could bring tears to my eyes or fill my heart to overflowing.”

“That summer I learned that the contents of a book could resonate in the heart and linger in the memory.”

“I realized at some subliminal level that a book is more than pages covered with printed words. A book is a package of wonder, a container of bliss, a vale of emotion, an unexploded bomb. A book can not only draw the reader into a new world and toward new friends but also separate him from the old world and old friends.”

“One book can change a person’s life. A library can change the world.”
ABOUT THE AUTHOR: 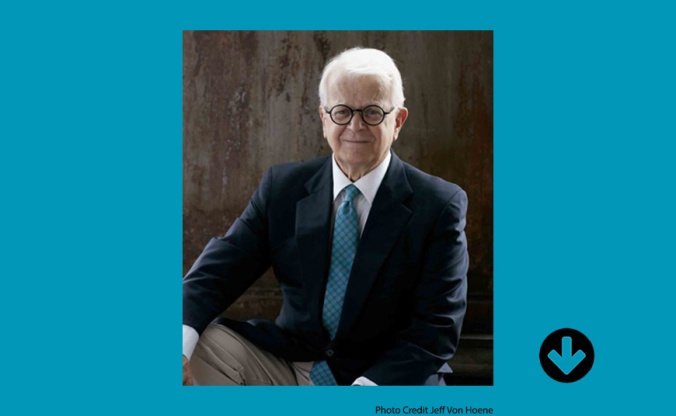 Robert Coram’s career as a writer began in Edison, GA, a town of about 1200 located deep in the southwestern part of the state. Edison is a farming town. Most young people leave as soon as possible. Coram is the only person from Edison ever to become a writer.

Coram was hired as a reporter for The Atlanta Journal when he was a sophomore in college. Like many who suddenly discover their life’s work, he was enthusiastic and prolific. He was a general assignment reporter & also wrote features, book reviews, travel stories, & aviation stories. He covered the civil rights movement in Atlanta during the 1960s and he wrote freelance articles for the Atlanta Magazine, for aviation publications, and for national magazines.

For several years Coram wrote for McGraw-Hill publications out of the Atlanta bureau. He covered the early days of the environmental movement and he covered the civil war in Biafra.

Coram spent four years as a staff writer for Atlanta Magazine. Then he moved to Cumberland Island, an island off the Georgia coast. The first year he was a house sitter & the second year he was a ranger for the National Park Service. Thus, he is one of the few writers who also has been a federal officer. During his two years on Cumberland he wrote for Sports Illustrated and did several travel pieces for the Sunday New York Times.

He returned to Atlanta in the mid-1970s and resumed his freelance career. He wrote a media column, the first in Atlanta, for the weekly Atlanta Gazette.

These articles resulted in his being asked to become a reporter for The Atlanta Constitution. The first year he received a Pulitzer Prize nomination for his stories about drug smuggling. The second year he covered the war in El Salvador. He received another Pulitzer Prize nomination for a series of articles that stopped the National Park Service from developing Cumberland Island. The third year he was fired by a new assistant managing editor who said Coram’s interviewing techniques were too aggressive.

Coram now had the unique distinction of having been fired from both The Atlanta Journal and The Atlanta Constitution. The two papers later merged, so his feat can never be duplicated.

While he was at the paper he became a part-time instructor at Emory University and taught writing courses there for 12 years.

He also resumed his freelancing and, at the same time, began writing books. He wrote five books before he published his first one. The five were not proposals nor were they a few chapters; they were 400-page manuscripts. That they were not published he considers proof God is sometimes merciful toward the reading public.

Signet published his “Narcs” series. These three books were based on his experiences writing about drug smuggling. Then came four police novels based in Atlanta. Woven among the novels were three non-fiction books: an investigative book about Antigua, a book about an Irish woman who works in Saigon with street children, and a fishing book for National Geographic.

As the 1990s drew near the end, Coram looked back over his books. He said that writing 10 books in 10 years was both good and bad: good in that it showed a certain professionalism, bad in that rarely are lasting books written at such a speed.

When Coram is not writing, he is fly fishing on the Georgia coast.

OTHER BOOKS BY ROBERT CORAM: 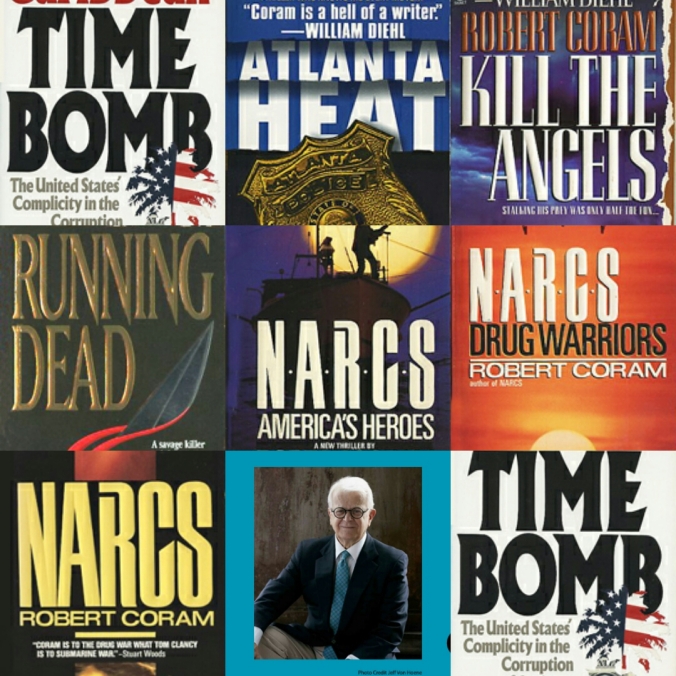 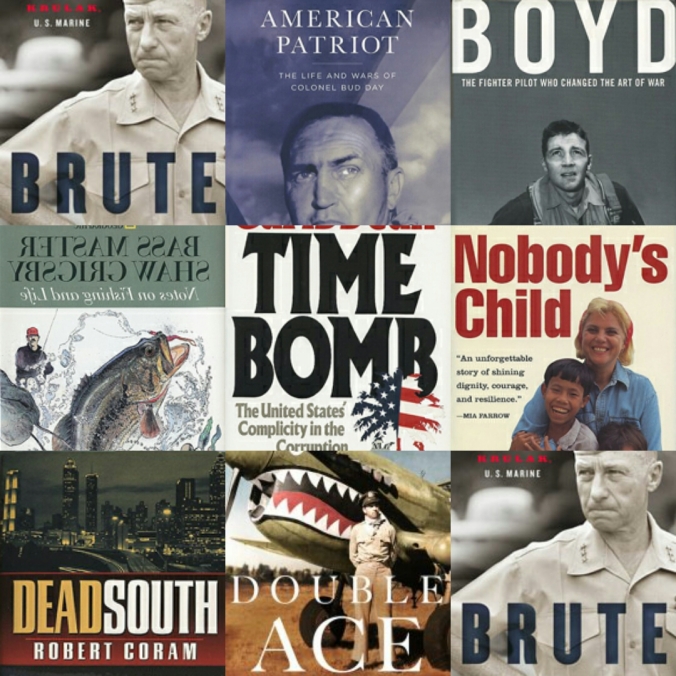 MY AWARDS FROM NETGALLEY: