NICOLA CLAIRE’S DESCRIPTION OF THIS BOOK:

“This is not your average historical romance. You’ll find no bad-boy earl deflowering his virgin lady here.”

“It’s the true and sometimes devastating vagaries of love. And like Jack, it will rip you apart in the end.”

“But it is a love story … mixed up with a whole lot of mystery and death.”

The year is 1891. The place is Auckland City, New Zealand.

“Hell is Auckland City on a protest rally day.”

Anna Cassidy and her cousin Wilhelmina are part of the Suffragette movement and are protesting for women’s right to vote when chaos breaks out. When Wilhelmina faints, and is almost strangled to death by the sandwich board she is wearing, Anna pulls out her switchblade and quickly frees her friend before she is choked to death.

This scene takes place on the first pages of FEARLESS and tells the reader quite a bit about not only the current political climate, but also about Anna. Women in 1891 did not normally carry switchblades, nor were they known for their quick thinking in a crisis. Women of that time period were more likely to swoon and faint than to face adversity head-on. Anna Cassidy is obviously not a typical woman of the 1890s.

This book however is not just a story about the Suffragettes, it is also a suspense thriller with a good dash of gothic romance mixed in.”

Nicola Claire has the exceptional talent of bringing her fictional characters to life and of making them seem real to her readers. Little things are added throughout the book that add realism such as Anna’s habit 0f “… chewing [her] bottom lip nervously; a habit [her] father had tried unsuccessfully to wean [her] of.”

In fact, I love Anna’s character. She is a strong (perhaps even willful) woman who will not compromise her beliefs even when it is to her detriment. She is in her middle twenties which was considered an extremely old age for a woman to remain unmarried in 1891. In fact, she is perilously close to being labeled a “spinster”.

There is mention of Jack The Ripper in this book and I was worried that this was going to become a major portion of the plot and I am very happy to say that it did not.

I enjoyed the ‘who-done-it’ aspect of this book and was pleasantly surprised at the ending.

The eBook that I received had just over ten editing/proofreading errors in it which means that based on my own (made-up) rules, that I have to reduce the number of stars I give as a rating for this book. With that in mind, I give FEARLESS a rating of 4 out of 5 stars. ⭐️⭐️⭐️⭐️

There are two more books scheduled to be released soon in the Scarlet Suffragette series and I am looking forward to reading more of Anna’s adventures. 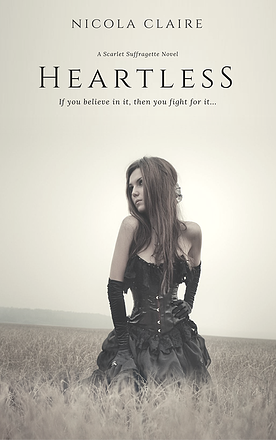 She has tried her hand at being a paramedic, a bank teller and even a medical sales rep. However, her love of writing keeps calling her back.

Nicola has a passion for all things suspenseful, spiced up with a big dose of romance. Nicola has a tendency to write about strong characters such as alpha males and highly capable females.

When she isn’t writing or reading, Nicola enjoys spending time at Lake Taupo with her sons.

Join Nicola’s Reader’s Group and e-newsletter to receive a free starter library of three of her books for free.