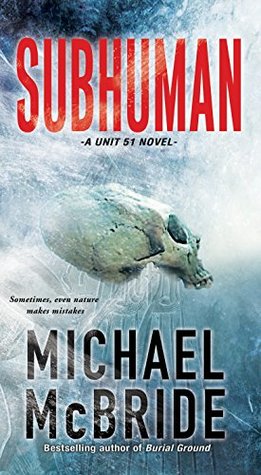 THEY ARE NOT HUMAN.

At a research station in Antarctica, five of the world’s top scientists have been brought together to solve one of the greatest mysteries in human history. Their subject, however, is anything but human . . .

THEY ARE NOT NATURAL.

Deep beneath the ice, the submerged ruins of a lost civilization hold the key to the strange mutations that each scientist has encountered across the globe: A misshapen skull in Russia. The grotesque carvings of a lost race in Peru. The mummified remains of a humanoid monstrosity in Egypt . . .

THEY ARE NOT FRIENDLY.

When a series of sound waves trigger the ancient organisms, a new kind of evolution begins. Latching onto a human host—crossbreeding with human DNA—a long-extinct life form is reborn. Its kind has not walked the earth for thousands of years. Its instincts are fiercer, more savage, than any predator alive. And its prey are the scientists who unleashed it, the humans who spawned it, and the tender living flesh on which it feeds . . .

“A fast-paced and frightening ride. Highly recommended for fans of creature horror and the thrillers of Michael Crichton.”—The Horror Review on PREDATORY INSTINCT

“McBride writes with the perfect mixture of suspense and horror that

keeps the reader on edge.” —Examiner

Anya screamed and ran to Richards. Grabbed him by the back of the jacket and pulled.

The freezing air buffeted her in the face when she looked up and saw a man only vaguely resembling Armand Scott pounce to the ground from on top of Connor. Snowflakes blew sideways past him and stuck to the walkway between them. His cranial deformity was identical to that of the remains she’d unearthed in Russia, only the physical expression of the flesh was for more terrifying than she could ever have imagined. She’d envisioned its face as being similar to that of modern man, but there was nothing remotely human about Scott’s appearance. Everything about him was alien, from the grayish cast of his skin to the way he twitched and moved in lurches, as though unfamiliar with the mechanics of motion.

Fissures crackled as they raced through the Plexiglas.

The creature scuttled forward and cocked its head, first one way and then the other. Blood dribbled from its mouth when it issued a hiss that sounded like steam firing from a ruptured pipe.

Anya screamed and threw herself to her knees.

She grabbed Richards underneath his arms and shouted with the effort of lifting him. He found his feet, but couldn’t seem to take his eyes off the creature.

The stairwell echoed with the drumroll of footsteps hitting the iron steps.

Anya looked back and saw several silhouettes bounding down the staircase toward them. She jerked Richards so hard she nearly sent him sprawling once more, but he regained his balance and stumbled backward with her. She took advantage of his newfound momentum to drag him away from the creature, which lunged forward, cutting the distance between them in half.

A scream from behind her.

She whirled to find Kelly in the opening to the Skyway, her hands clapped over her mouth. When Anya looked back, the creature was within ten feet of them and tensed to make another advance.

More popping sounds from above her. The cracks spread through the walls in her peripheral vision. Chunks of Plexiglas fell to the ground between her and the creature, which released a series of clicking sounds and retreated into the blowing snow.

A loud snap and a cable sang past to her right. The entire bridge shuddered.

“There’s another one behind us!” Jade screamed.

“And then what?” Jade asked. “We’ll be trapped in here without light or heat or any way to signal for help.”

Anya pulled Richards toward them. If she could just cross the threshold at the end of the Skyway, they could seal the creature on the other side.

Another cable snapped and the floor dropped.

Anya hit the ground on her knees and barely scrambled out of the way before Richards landed on top of her.

The walkway sloped downward toward where the creature crouched. The domed Plexiglas shattered and dropped enormous shards between them. The storm raced through the gap, creating a moving wall of snow between them that nearly concealed the creature as it approached, low to the ground and coming up fast.

The Skyway slanted downward, so steeply that Anya started to slide. She grabbed Richards by the back of the jacket with one hand and reached for anything at all with the other.

“Hang on!” Evans shouted and dove for her. He caught her by the wrist and halted her slide.

Another cable snapped and whipped the frozen glass beside them hard enough to shatter the glass and impale her cheek with tiny fragments.

Evans groaned and pulled her up toward the doorway, the seal around which was already buckled and peeling away from the building.

Friden tentatively crawled to Evans’s side, grabbed Richards, and pulled hard enough on the back of his coat to pry him from Anya’s grasp, lightening her burden enough that Evans could drag her up the slope and over the fractured edge.

She scurried past Evans, turned around, and helped the others pull Richards into the stairwell.

Bolts snapped and structural rings disengaged. Bits of Plexiglas cascaded down the bridge toward where the creature crawled toward them.

A chasm opened behind it. Connor’s body slid through, tumbled out over the nothingness, and vanished into the storm.

The creature slapped at the floor with its bare hands as the bridge grew steeper, digging its fingernails into the tiles in an effort to gain traction.

Evans pried the door from the recess until the others were able to help him drag it across the entryway.

The creature shrieked and scrambled uphill, blood dribbling from the gunshot wounds on its chest.

It was nearly upon them when the Skyway broke away from the building.

The creature’s eyes widened. Its nails tore from the cuticles. It screeched and flailed.

The last thing Anya saw before they sealed the door was the expression of sheer terror on its face as it plummeted into the blowing snow.

“Someone help me!” Roche shouted from the landing at the top of the staircase, where he struggled to jerk the door from its slot in the wall. “It’s right behind me!”

Anya rushed for the stairs and hit them behind Kelly and Jade, who were already halfway up. She barely had the strength to climb and had to use the railing to pull herself higher. She nearly lost her balance when her hand slipped in something wet, but she managed to stumble forward and made it to the landing, where the others already had the gap down to a mere foot. A dark shape streaked straight toward the opening from the foyer on the other side, the light reflecting from its inhuman eyes.

She threw herself against the face of the door and used her shoulder to help the others drive it closed with a resounding thud.

The creature struck it from the other side, hard enough to knock her backward, but she braced herself and leaned into it again.

Kelly screamed beside her as the creature hurled itself against the steel door, over and over.

Until, finally, it stopped.

Anya desperately listened for any indication of what it was doing on the other side but couldn’t hear anything over the combination of their heavy breathing and whimpering.

She pictured Arkaim, with its twin fortified rings, a veritable fortress that should have been able to withstand any siege, reduced to little more than scorched rubble in the middle of a field, and the strange remains she exhumed near its outskirts. She’d made a terrible mistake in assuming that the coneheaded species represented a terminal branch in the human evolutionary tree rather than an off shoot from modern man, one facilitated by something lacking in humanity, something subhuman, the outward physical manifestation of which looked an awful lot like the alien species referred to as Grays.

Only there was nothing fictional about this being.

The creature shrieked and threw itself against the door one final time. It released a torrent of guttural clicks, then retreated into the station. The sound of its footsteps diminished until she couldn’t hear anything from the other side at all.

Anya stepped back and looked at the door. Her hand had left a smear of blood on the steel. She glanced down at her palm, expecting to find a laceration, but the skin was intact.

She took Roche’s flashlight from him and traced the railing down to where she’d slipped. There was blood on the rail, and even more on the wall above it, leading up to a hole in the exposed ductwork. Her heart sank when she gave voice to what they were all thinking. 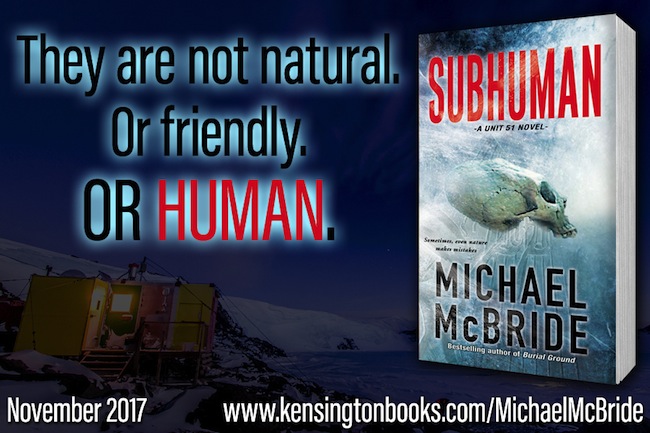 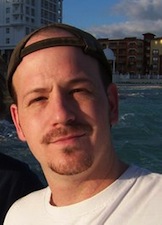 Michael McBride was born in Colorado and still resides in the shadow of the Rocky Mountains. He hates the snow, but loves the Avalanche. He works with medical radiation, yet somehow managed to produce five children, none of whom, miraculously, have tails, third eyes, or other random mutations. He writes fiction that runs the gamut from thriller (Remains) to horror to science fiction (Vector Borne, Snowblind) . . . and loves every minute of it. He is a two-time winner of the DarkFuse Readers’ Choice Award. You can visit him at author.michaelmcbride.net.