* I received a free copy of this book from the author in exchange for an honest review.

This is the second book that I have read written by author: Jonathan Maas. The two books are not related in any way and are stand-alone novels. The first book I read was “Spanners: Fountain of Youth” which was amazing. Because of how much I enjoyed that book, I was eager to read more titles by the same author, and he did not disappoint. “Flare” is easily one of the best post-apocalyptic books I have read and is a stand-out in a field that is crowded with mediocrity.

A solar flare not only hits the Earth, but it continues to scorch and burn continuously with no sign that it will ever end. Billions died in the initial flare since anyone exposed to the sun whether outdoors or even inside through their windows fell victim to the sun’s incredible power.

Those who were lucky enough to survive the initial solar flare quickly realize that their lives and their world will never be the same.

I have read other post-apocalyptic novels in which a solar flare knocks out the planet’s electrical grids and any devices (including most post-1980 vehicles) that had relied on computers to run. However, this book is unique in that the solar flare was not a single, one-time-only event. The flare is ongoing and every day as soon as the sun begins to rise, survivors are forced to retreat into light-tight rooms or shelters.

Survivors face a much different world from the one they have always known. Imagine never again seeing the sunshine and never being able to feel it’s warmth of your face. In fact, the sun has become your enemy and it is deadly. Imagine that the only time you can safely leave your shelter is at night.

Now, think about the fact that the flare put an end to electricity. This means that when you are finally able to venture outside, you do so to a world almost completely devoid of light. Flashlights are a necessity and evil could easily sneak up on you in the darkness. What kind of life would you be able to have?

This book follows the trials and tribulations of two very different flare survivors. The tale switches back from Zeke’s story to Ash’s story.

These two men could not be more different. Ash is Caucasian and is a certified genius who is deeply troubled. Zeke’s is an African American with deep black skin that helps him blend in with the night.

Both Ash and Zeke’s somehow learn that there is a rumour of a safe haven from the flare called “Salvation” and each sets out on journey to find it.

“To get there they must each travel through ravaged towns and over hundreds of miles of charred earth, and must do so under a sky waiting to kill them with every sunrise.”

“But with the world’s population dying off and humanity getting more and more violent as the days pass, their paths are destined to collide, because this unknown and unseen place might be the only hope remaining.”

Jon Maas has created characters that are easy to relate to. You would think that a genius like Ash would come across as a pompous jerk, but this could not be farther from the truth. In fact, readers will be drawn to Ash despite his intelligence and just about every reader should be able to relate to him in some small way.

Zeke is an interesting character and it is impossible not to be drawn into his story. This takes skill on behalf of the author since Zeke is almost completely mute.

I absolutely LOVED this book. The author’s attention to detail and his seemingly instinctive grasp of both the good and bad within all men makes this book a read that will stay with you long after you finish reading it.

FLARE is 502 pages long and yet it never seems to lag. It is a MUST READ for lovers of post-apocalyptic fiction. This book is NOT TO BE MISSED.

Jon Maas has proved with the writing of FLARE that he is an author to watch. I absolutely can’t wait to read more books by this talented author.

I would rate this as 6 stars if it were possible. As it is, I give it the highest rating possible which is 5 out of 5 stars. ⭐️⭐️⭐️⭐️⭐️

http://www.jonmaas.com
Jon Maas was born in New Haven, Connecticut and grew up in San Antonio, Texas. After graduating from Stanford University with degrees in Biology and History, he’s earned a living as a Musician, Peace Corps Volunteer, Standup Comedian, TV Producer and Web Designer.

His first novel, “City of Gods – Hellenica” has been well received, and his second book, ‘Spanners: The Fountain of Youth’ won the award for ‘Best Young Adult Fiction’ at the 2014 San Francisco Book Festival, as well as ‘Best Science Fiction’ at the 2015 IndieReader Discovery awards.

‘Spanners: The Fountain of Youth’ is the sequel to the independent movie ‘Spanners,’ which is currently on the film festival circuit – http://www.spannersthemovie.com .

“Flare” is his third book. Jon Maas is currently working on another book, which he hopes to release by December 2015.

He writes on his bus commute to and from work, and I am really glad he does.

To learn more about this astoundingly talented author visit http://www.jonmaas.com

Title: SPANNERS: The Fountain of Youth

* I received a free softcover copy of this book from the author in exchange for an honest review.

This book is simply BRILLIANT!

The story is unique and the characters are utterly fascinating.

“Spanners: Fountain of Youth” is a MUST READ book for lovers of Science Fiction as well as those who love alternative history stories.

Have you ever heard of Juan Ponce de Leon and his quest for the Fountain of Youth?

Most people have at least a vague idea of the story. In fact, if I remember correctly, there is a spring in Florida that some believe, even to this day, is the fabled ‘Fountain of Youth.”

Well, this is so NOT that story. This is something unique. Readers are in for a treat.

Jon Maas has introduced “Spanners” to the world.

Humans live (on average) from zero to eighty years consecutively, but Spanners don’t.

Spanners have different life spans from the rest of us. Some Spanners live their lives in reverse, some live only a matter of months and some are literally immortal.

There are hundreds of different types of Spanners and each type is unique. In addition to their varying life spans, they also have various powers.

Just like regular humans there are “good” Spanners and there are “evil” Spanners. But, how do you stop an evil Spanner if he can’t be killed?

The ancient Arawalk Indians thought they had the perfect solution; bury them deep underground in a stone casket and leave them to spend eternity in a box under the earth.

But what happens when someone uncovers that casket and sets the being inside free?

You will need to read “Spanners: Fountain of Youth” to find out.

I can vouch that this book will completely suck you in. It is literally impossible to put down. In fact, I suggest you set aside a couple days and clear your schedule of everything other than reading this book YES, IT IS THAT GOOD.

Not only is the story fascinating, but the plot is incredible as well. The variety of different Spanners that Jon Maas has created are AWESOME. These ‘beings’ should come across as ridiculous or at least as unbelievable, but somehow the author has made their very existence seem perfectly logical and highly believable. The different variations of Spanners and their “class” is so well written that readers may start to wonder if perhaps there are Spanners in their own neighbourhood.

As far as I am concerned this book is a MUST READ and I quite happily and with complete confidence rate it as 5 out of 5 stars. ⭐️⭐️⭐️⭐️⭐️

I am also excited about the fact that this book has been made into a movie and I can’t wait to go see it. To watch the movie trailer go to:

The movie has won multiple awards since it’s release and I am hoping that it will be screened here in Ontario, Canada soon. 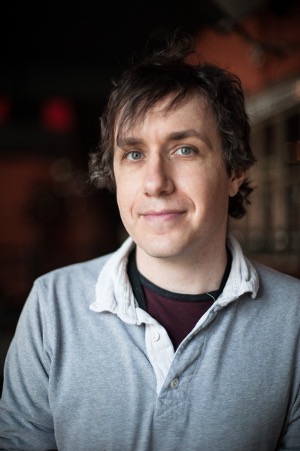 Jon Maas was born in New Haven, Connecticut and grew up in San Antonio, Texas. After graduating from Stanford University with degrees in Biology and History, he’s earned a living as a Musician, Peace Corps Volunteer, Standup Comedian, TV Producer and Web Designer.

His first novel, “City of gods – Hellenica” has been well received, and his second book, ‘Spanners: The Fountain of Youth’ won the award for ‘Best Young Adult Fiction’ at the 2014 San Francisco Book Festival, as well as ‘Best Science Fiction’ at the 2015 IndieReader Discovery awards.

‘Spanners: The Fountain of Youth’ is the sequel to the independent movie ‘Spanners,’ which is currently on the film festival circuit – http://www.spannersthemovie.com .

He has released his third book this year, ‘Flare,’ and it has been well-received so far. He is working on another book, which he hopes to release by December 2015.

He writes on his bus commute to and from work, and I am really glad he does. 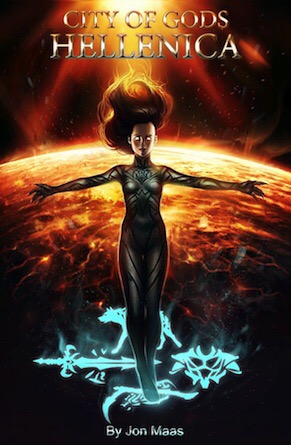