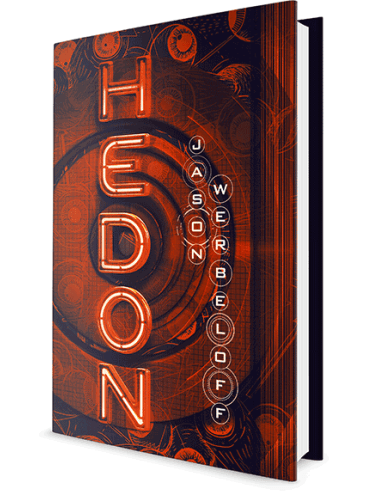 ~ I received a free copy of this book in exchange for an honest review.

In 2051, the Bhutanese Empire rules post-apocalyptic Shangri with iron-fisted Buddhist compassion. Happiness is compulsory, but making everyone happy isn’t easy in an overpopulated world. Breeders are ghettoed, homosexuality is mandatory, and Shangrians’ happiness levels are strictly monitored by hedometers implanted in their heads. Become depressed, or feel too happy without helping others feel the same, and The Tax Man will get angry. Very angry.

Gemini and Cyan, winners of the pregnancy lottery, are on the run. Cyan can’t fall pregnant, and Gemini is addicted to the Experience Machine. Will they evade The Tax Man, and find a way to end the brutal pleasures of Shangri?

The lovechild of Brave New World and The Handmaid’s Tale, HEDON is gritty satire on a dystopia drunk with bigotry and positive thinking.

This book is definitely not for those who are squeamish. It is meant only for adults 18+.

In a utopian world (to some) and a dystopia to others, where homosexual sex is not only the norm, but is a requirement, anyone with heterosexual proclivities must hide their nature to live in Shangri. Those that do not, or will not, are considered to be the dregs of humanity and are forced to live in the walled ghetto. Shangri citizens call them “BREEDERS” which is considered the ultimate slur.

“SHANGRI – Ensuring your happiness, so you don’t have to.”

The ghetto which is highly reminiscent of the Jewish ghettos created by Hitler during the Holocaust, is a slum. People raised in Shangri believe that Breeders are completely lawless and that they drink the blood of babies. This is again similar to the propaganda that Hitler’s Third Reich spewed during World War 2.

The ideals of Shangri are wonderful. It is the way they go about pursuing those ideals that is the problem.

This novel will force you to face some hard questions. What would you be willing to do to survive? Would you give up? Or would you bide your time and hope for a chance to fight the good fight? These are only a few of the quandaries that the protagonist faces in HEDON.

Jason Werbeloff has done an amazing job of writing about the difference between an ideal and the achievement of that ideal.

This novel is a fascinating dystopian tale that will stay with you long after reading the final page.

I have no choice but to rate this novel as 5 out of 5 stars. ⭐️⭐️⭐️⭐️⭐️ It actually deserves a higher rating, but 5 is the highest allowable.

Human. Male. From an obscure planet in the Milky Way Galaxy. Sci-fi novelist with a PhD in philosophy.

Likes chocolates, Labradors, and zombies (not necessarily in that order). Werbeloff spends his days constructing thought experiments, while trying to muster enough guilt to go to the gym.

He’s written two novels, Hedon and The Solace Pill, and the short story anthology, Obsidian Worlds. His books will make your brain hurt. And you’ll come back for more.

Subscribe to his newsletter to receive a free novel, and a lifetime of free and discounted stories: http://smarturl.it/werbeloff