For his entire life, twenty-two-year-old Chance Lee has been dreaming of greatness — something far beyond getting high in his mother’s old farmhouse, and much more prestigious than playing in a twangy West Virginia country band on the weekends. Unlike many other small-town boys with lofty dreams, Chance see his future of musical greatness, with his best friend Tollie by his side, as an undeniable fact. And when a reading from a local fortune-teller seems to affirm his unstoppable luck, it’s not long before he’s ready to break out of Falling Waters and put his plans in motion. But when creative differences and the undeniable pull of home begin to get in the way, Chance is finally given reason to doubt his lucky star — at least, until he finally hits the road alongside an unexpected companion.

Sometime in the 1980s, Chance and his best friend and band mate, Tully, visit a fortune teller on the night of the full moon. That night changes everything. Of course, they were unaware of the changes at the time.

Young men, a bit of weed, raging hormones, a lot of music, women, sex, rock’n’roll, friendship and a desire for something more all come together in the mish-mash of indecision which faces all youth.

Witty and engaging, this fictional memoir will have readers reminiscing about their own youth.

The narrator for this audiobook may be new to the profession, but he did an commendable job and his accent made the scenes come alive. The only issue with the narration was that at one point you hear him grunt which actually provided a bit of comic relief. Also, the pauses between chapters are a bit too long for my taste. 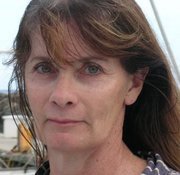 Linda Collison’s fiction, nonfiction, and articles have appeared in a variety of publications. Her debut novel, “Star-Crossed,” was chosen by the New York Public Library as a Book for the Teen Age-and her writing has received awards from the “Literary Fiction Review,” “Foreword Reviews,” “Honolulu Magazine,” and more.

In addition to her career as an author and freelance writer, Collison has worn many other hats-including mother, registered nurse, volunteer firefighter, skydiving instructor, and restauranteur.

Born and raised in Maryland, she lived in Hawaii for many years with her husband Bob Russell. Currently, the couple resides in Colorado.